How Earth Day and Environmental Conciousness Have Evolved 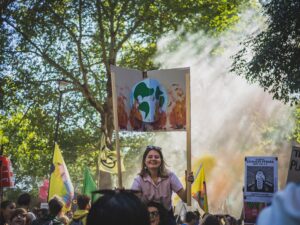 Reduce, reuse, recycle is a mantra for many people. It’s difficult to imagine that just 50 years ago awareness of the state of the environment was not part of the collective consciousness.

An emerging public consciousness about the planet began amid environmental issues like increased air pollution and massive consumption of fossil fuels in the 1960s. The bestselling book “Silent Spring” by Rachel Carson also raised public concern for living organisms and the links between pollution and public health. The push for environmental reform gained even more momentum on April 22, 1970, when the first Earth Day was celebrated. Then-Senator Gaylord Nelson from Wisconsin put Earth Day on the national stage following a large oil spill that struck off the coast of Santa Barbara, Calif. Before this disaster, recycling was not a word in the popular lexicon. But when the disaster struck, people began to reason that changes would have to be made to save the planet.

Since the first Earth Day 50 years ago, many strides have been made in the environmental movement. This grassroots initiative gave rise to the establishment of the Environmental Protection Agency, the Clean Air Act and the Clean Water Act. Environmental awareness has become much more mainstream and is a less polarizing issue than it was in the 1970s, although there are still debates about the reality of climate change and other risk factors. Public demand for environmental safeguards grew in the second half of the twentieth century, and those demands have grown stronger in recent years. Legislation is continually evolving to protect the air, land and water. Sustainability has joined the buzzwords of the movement, and most industries now have a vested interest in changes that can minimize risk to human health and the environment.

Mitigating or avoiding environmental effects, proper waste disposal, reduction in water discharge, and emphasis on reducing, reusing and recycling have become important components of environmental wellness. And people are being educated at earlier stages on the importance of environmental mindfulness. For example, core subjects of the environmental movement are increasingly covered in elementary schools.

Twenty million people turned out for the first Earth Day celebration in the United States. Today, more than 190 countries are engaged and more than one billion individuals are mobilized for action every Earth Day, with festivals and celebrations large and small throughout the globe. There is still work to be done, but great progress has been made since 1970.