Let’s Write About is an inclusive, born-accessible children’s show exploring social-emotional themes through creative writing and inspiring inquiry-based learning with sensory activities that kids of all abilities can do at home. The show pulls from my work as a teaching artist and began as a way to create more accessible asynchronous content for virtual learning. In each episode, there’s a multi-sensory writing prompt and rhythm, song, and movement are used as entryways to literacy.

As an educator, I consider play central to learning and development. One challenge for me in first writing and filming Let’s Write About was to figure out how to best model and promote pretend play in an asynchronous setting.

Like many children’s shows, Let’s Write About uses puppets. For one of the puppet character sets, the Space Cacti, I film myself using them like figures or toys I’m playing with rather than hand puppets. In their scenes, my hands are clearly in the shot, moving the characters around and manipulating them for speaking parts. Filming this way gives me the vantage point to, in the words of Stanley Greenspan and Serena Wieder, “speak not for yourself but for the doll. Become the doll and show the child how to enter the make-believe world. This introduces her to new ideas and symbolic constructs.” Unlike characters such as Dragon and Queen Cumulonimbus who children see me on screen speaking to, the Space Cacti are always, well, in space. The far reaches of space comprise the make-believe world (or worlds really) I’m inviting the viewer into.

When acting out the Space Cacti, I’m encouraging viewers to play along or engage in their own play. I’m doing so not only because play itself is important, but because pretend play is a building block of language:

When we use symbols, we use something to stand for something else. In the case of pretend play, children may use one object to stand for another, such as pretending a spoon is a hairbrush, or a tablecloth is a cape. This type of symbolic thought is also needed for language, as our words are symbols. Our words stand for our thoughts and ideas. Therefore, pretend play and language both involve the same underlying ability to represent things symbolically (Weitzman and Greenberg, 2002).

As an educational, literacy-based show it’s crucial for Let’s Write About to address and build on these foundational, pre-literacy skills. There are no specific pretend play scenes, like there are writing and sensory craft sequences, but instead the skits showcase play without getting pedantic. Play should be playful and attempting to teach or inspire it any other way would be counterintuitive. My goal in these skits is to model the joy of improvising and using your imagination by simply having fun myself.

For now, Barrel, Prickly, and Dr. Panda are in charge of the play department, but as the show develops perhaps some new characters will join in!

View the Space Cacti in action in “Let’s Write About World Building”[https://youtu.be/TbwbDcSKzVQ]

Compare the performance with my interaction with Dragon in “Let’s Write About Dinosaurs” [https://youtu.be/dL5PigBjvCU]

Donnie Welch (he/him/his) is a poet and educator who has worked with students with intellectual, developmental, and multiple disabilities since 2014. His project is fiscally sponsored by Accessible Festivals. 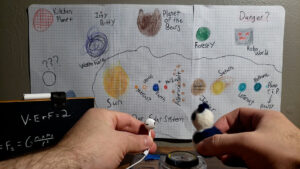